When talking about writing a script for a video, most think of effective ways to visually showcase a product, be it animation, the presentation of the demo, etc. In fact, while what’s happening on screen is extremely important, an explainer video script can make or break a video.

This is due to the fact that most people are multi-taskers – they tend to listen to videos rather than watch them. Thus, what’s said is in a way even more important than what’s happening on screen.

A strong video script matters a great deal in 2021. Though there isn’t a one-size-fits-all approach for writing a perfect text to accompany the visual, there are certain practices experienced writers follow. In this blog post, we’ll go over the main tips and strategies that’ll help business owners explain how great their product really is. You’ll find a PDF template for explainer video scripting as well. You can easily customize it to your business to make it appear unique to you.

See a brief summary of the article in our video.

What is an explainer video?

In a nutshell, an explainer video is a short clip that explains a product (service) in a short, concise way. Businesses try out various styles – animated videos, the demonstration of the product with a voice-over, a clip with physical action. Explainer videos are educational as well as business-oriented. There’s a specific set of characteristics that makes these videos different from any other video content:

When it comes to explainer business video script writing tips, it’s highly recommended to keep a particular target audience in mind. Knowing how to define the needs of the audience and explaining the solution in a way that’s familiar to a viewer is crucial for explainer videos.

Example: we were asked to create an explainer video for kitchen rent service Pilotworks. The service allows you to rent a kitchen space of every level and any specialty. The idea is that anyone may have a set of professional tools for an affordable price.

How do you structure your video script?

While the story is the foundation of your explainer video, due to the lack of time and resources, it’s important to have an outline as well as the general idea of how the video will unfold.

Seeing that a video script is still creative work, you can be inventive in terms of the structure. Still, there are certain ways to structure a script that are proven to be the most efficient in the market.

Step 1. Decide on the video length

If you manage to put the essence of your video in 60 seconds, consider this a success. Essentially, it would mean dividing a story into a 15-second introduction, 30-second body with the main product presentation, and a 10-second conclusion.

As mentioned above, the video is a creative medium where there are no rules or carved-in-stone structures. While there’s enough space for creativity, most videos still fall into two categories:

Step 3. Outline the story in 5-6 sentences

After there’s an overall idea as to what your story might be and the way to tell it, don’t rush into writing the script. Better yet, go with a short 5-6 sentence outline with the main ideas you’d want the story to explore and deliver. Later, it’ll come in handy while writing an actual script.

Step 4. Write a draft of the script

Drafting is a step that follows the outline directly. How are the two different? In the second case, you’re writing as if it were an actual video script. However, as it’s your first (or, as many say, ‘vomit’) draft, there’s no need to pay special attention to spelling, grammar, punctuation, etc. Later, this draft will be edited and cut a few times but it’s crucial to see if the structure works and to get the initial ideas out of your system.

Step 5. Make edits, especially when it comes to the language

It’s highly important for the final draft of your script to be concise and simple. That’s why when it comes to making edits, you need to pay attention to the language of the script. Avoid filler words (there’s no time for them), difficult terms (they are often challenging to pronounce as well), and repetitions (it feels redundant to a listener and, as mentioned before, every second is too precious to waste it on repetitions).

Step 6. Adjust the script to a voiceover

The last crucial step in structuring a script is adapting the written text to the voiceover. Here’s what it can mean:

It takes a lot of skill sets to create an explainer video script – you should know a lot about writing itself, video production and editing, and marketing. However, writing a concise text for a video is not quantum physics – you can pull it off with nothing but enthusiasm and perseverance. If you need a few tips to make the writing process easier, we’ve got you covered.

Here are the top hacks that are known to prove useful for business owners when writing for explainer videos.

If you don’t know how to write a script for a video from scratch or you’re looking for inspiration to start a draft, take a look at this one of the explainer video script examples. It has the structure laid out – all you need to do is insert the names and the details about your product. With this explainer video script writing template pdf, you’re ready to move past the writing stage and start shooting or animating the video. 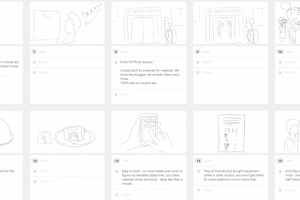 To make sure you use the medium of explainer videos to the best of its ability, put some time and effort into creating a flawless script. Pay attention to structuring your story, fitting all the main points into one minute.

The language of the script is highly important – be sure to keep it simple and concise. Keep your target audience in mind and make sure you make these people feel emotional about your product.

Thank you
If you have any questions, let’s discuss it!
Let’s talk

We use technical and analytics cookies to ensure that we give you the best expirience in our website. More info...